Presidents and VPs with Foreign-Born Parents 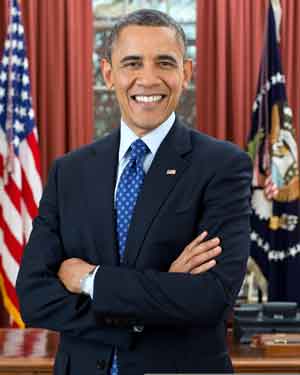 Immigrants have always been a very important part of the history of the United States but not everyone knows that many U.S. Presidents and the current Vice President are children of foreign-born parents who immigrated from other countries looking for a better life for their families. India, Jamaica, Kenya, the United Kingdom, and Ireland are only a few examples of countries linked to U.S. presidents and the vice president. The U.S. Constitution states that to be able to hold a position in the highest office in the world someone needs to be born on U.S. soil, but that doesn’t apply to their parents.

She has made history in the U.S. being the first African American and Asian American woman to become Vice President and the highest-ranking female in the U.S. government. She is the daughter of immigrant parents, Donald Harris from Jamaica and Shyamala Gopalan from India. They met when they both were 24 years old and doctorate students at the University of California Berkeley. After graduating, her mother became a prominent cancer researcher and her father a professor of economics. The oldest of two daughters, Vice President Harris was born in 1964 in California.

His mother was born on the Isle of Lewis in Scotland. She was the youngest of 10 siblings and was raised in a Scottish-Gaelic household with English being her second language. She immigrated to the U.S. in 1930 after a few of her brothers and sisters immigrated there and Canada, she was one of thousands of Scottish young workers who were looking for a better future. She arrived with $50 in her pocket, lived in Long Island with her oldest sister, and started working as a domestic servant. She met her husband, Fred Trump, a prominent real estate developer at a party and got married in 1936. President Trump, the fourth of five children, was born in 1946 in New York.

Originally from Kenya, Barak Hussein Obama Sr., father of President Obama came to the United States for the first time in 1959 after being accepted to a special program at the University of Hawaii, making him the first African foreign student accepted to study at that institution. He graduated in 1963 with a degree in Economics and while he was studying there he met and married, in 1961, Ann Dunham, mother of President Obama, who was born that same year. Eventually his father continued his studies at Harvard University until he returned to his native Kenya in 1964 to work as an economist for an oil company.

Son of Hulda Minthorn Hoover born in Ontario, Canada, and Jesse Hoover with German, Swiss, and English ancestry, he became the 31st President of the United States in 1929. Like many immigrants his mother dropped out of school after one semester to help her mother when her father passed away. She had three children (Theodore, Herbert, and Mary) and had to work very hard to support and grow her young family when her own husband passed away, 10 years after getting married. She became a quaker minister forcing her to leave her children with relatives when she had to travel for work.

Janet E. Woodrow Wilson, born in England in 1826, was the mother of President Wilson who was inaugurated in 1913. His father, Joseph Ruggles Wilson was also the son of Scotch-Irish immigrants. Among the many achievements that President Wilson accomplished during his two terms in office were his efforts to create the League of Nations with its mission to maintain world peace (he received the Nobel Peace Prize for that), his introduction of the 19th amendment in the U.S. constitution giving women the right to vote.

His father was born in Ireland and he became an orphan at the early age of two. He was raised by his uncle. At age 22 he decided to immigrate to the U.S. to start a new life with his aunt in Pennsylvania where he met his wife Elizabeth Spear and soon started a family. He became rapidly wealthy as a merchant, farmer, and real estate investor, and was thus able to provide a very high-level education to his son who would become president in 1857 after serving as Secretary of State and Minister to Russia.

His parents, Andrew Jackson and Elizabeth Hutchinson, immigrated from Ireland with their two sons just two years before President Jackson was born at the border between North and South Carolina. His father died unexpectedly from an accident, so he was raised by his mother and his uncles who also immigrated to North America from Ireland. After fighting in several battles against the British, Jackson started his presidential aspirations, becoming president for two terms from 1829 to 1837. He is remembered in history for being a thinker far ahead of his own time.