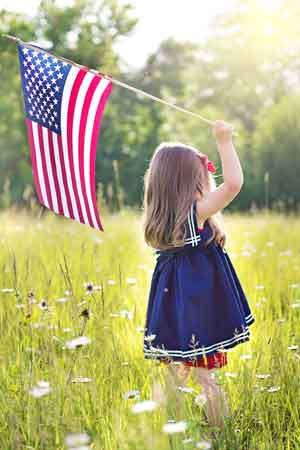 Americans love to celebrate their holidays!

The U.S. is a country of many traditions, religions, and histories and so are the major holidays celebrated in the country. Every one of the fifty states has its own holidays observed in them but there are some others that are celebrated nationally. From the famous ball drop in Times Square to celebrate the arrival of a new year to the celebration of George Washington’s and Abraham Lincoln’s birthdays known as President’s Day, to Independence Day that celebrates the declaration of independence from the British, and Thanksgiving that celebrates a harvest festival by the first pilgrims in the country, the U.S. has a lot of history to share and to celebrate.

Celebrated all over the world on December 31st and January 1st, these days mark the end of a year and the beginning of a new one. Traditionally in the U.S. people gather with friends and family eating, drinking, and waiting for the famous drop of the ball in Times Square in New York City, which is the official landmark that announces that the new year has arrived. From the beaches of Miami to the glamour of Los Angeles, and the busy streets of New York, the whole country pauses for a few minutes to celebrate a prosperous and new year.

This day celebrated on the third Monday every January and marks the birth (on January 15th) and the achievements of the most celebrated civil rights activist in the history of the United States. Although it is not a family-style celebration, it is common to see marches and parades all around the country to celebrate King’s message of non-violent protest and equality for all. Famous is his “I have a dream” speech that he delivered at the Lincoln Memorial in Washington, D.C. in August 1963, that attracted thousands of people to Washington, D.C. to demand for equality unity regardless of anyone’s background or skin color.

Although many people think that this holiday celebrates the current president in the White House, what this holiday celebrates on the third Monday of February are the birthdays of George Washington for being the first U.S. president and Abraham Lincoln for his preservation of the union, vindication of democracy, and the end of slavery. They both remain two of the most famous presidents in U.S. history and are also honored on the country’s $1 and $5 bills.

This holiday celebrates the resurrection of Jesus Christ and is celebrated in the U.S. with family. Normally, more religious people attend a special Easter mass in the morning and later meet with family to have an elaborate lunch. This is also a very special day for kids, who traditionally paint and decorate Easter eggs which they later give away as gifts to friends and family. Also, it is traditional to hide the painted eggs, or Easter eggs made of chocolate and sweets, in the house or back yard for children to find them, in that way creating a fun day for the entire family.

This national holiday previously known as “Decoration Day” honors all the U.S. personnel who gave their lives for the country and died in the line of duty. Traditionally, families with lost family visit the cemetery to take flowers at their graves and to honor and remember them. Volunteers with ties to the military place American flags at the graves of fallen heroes all around the country. This day to remember is celebrated on the last Monday of May and marks the unofficial beginning of summer in the U.S.

Juneteenth is short for "June Nineteenth," which commemorates the effective end of slavery in the United States. On June 19, 1865, federal troops arrived in Galveston, Texas to take control of the state and ensure that all slaves were freed. This happened over two years after the signing of the Emancipation Proclamation. Juneteenth honors the end to slavery in the United States and is considered the longest-running African American holiday. On June 17, 2021, it officially became a national holiday.

The national day of the United States, July 4th is probably one of the most celebrated days in the country marking the day of the Declaration of Independence from British rule. All around the U.S. people gather together to have barbeques, watch parades, have picnics and concerts, attend fairs, and enjoy some of the most amazing fireworks in the world at night. It is traditional for proud patriots and immigrants to wear red, white, and blue to honor the colors of the United States flag.

Celebrated the first Monday in September, it honors the American labor and all the contributions that workers have made for the country during the last few centuries. This is a holiday similar to what many countries around the world celebrate on May 1st under the name of International Workers Day. Traditionally in the U.S., it is also a day to gather together with family and friends to barbeque since it marks the unofficial end of summer and summer vacations.

This holiday, celebrated on November 11th, is a very special one for many families with U.S. military veterans who have served (currently or in the past) to protect the country. Other countries have similar holidays on the same day that marks the end of World War I. There are parades in many cities around the country to honor their service and many veterans attend wearing their original uniforms and war medals to be recognized.

This is probably the most family-centered holidays in the United States, which celebrates the blessing of the harvest by the first pilgrims that arrived in the country. It is celebrated the fourth Thursday of November and the day before it is usually the most traveled day in the year, with people from all over the country traveling to spend the day with their families. The tradition at Thanksgiving is to share dinner with family and friends, which includes turkey, stuffing, green beans, mashd potatoes, cranberry sauce, gravy, and pumpkin pie. The day after is also known as “Black Friday,” an unofficial “shopping” holiday when most stores open in the early hours of the morning and offer big discounts. This day also marks the beginning of the Christmas season, and it is when most Americans put up their Christmas trees and decorate them begin the festivities of the holiday season.

These two holidays are celebrated on December 24th and 25th by Christians and non-Christians around the world. Like in most countries, in the United States it is a time to spend with family and friends, sharing meals, and exchanging gifts. Traditionally, more religious families attend a midnight mass service to honor the birth of Jesus.