What Is A Green Card and How to Get One?

What is a green card? 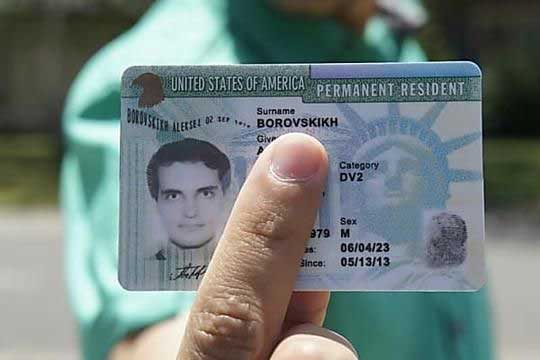 Get Your Green Card Through the DV Lottery!

Green card holders can apply for U.S. citizenship after having lived in the United States for at least five years.

The card is known as a "green card" because of its historically green color.

Green card application decisions are made by the United States Citizenship and Immigration Services (USCIS).

What are the rights and responsibilities associated with having a green card?

When you are a U.S. lawful permanent resident (green card holder), you have specific rights and responsibilities.

Green card holders have the right to:

Green card holders also have patriotic duties and must:

How to get a green card.

There are four basic paths to obtaining a green card.

U.S. citizens have the greatest ability to sponsor a wide range of family members to obtain their permanent residence. Such family members include spouses, children (unmarried or married and of any age), parents, and siblings.

U.S. permanent residents have a more limited range of family members for which they can petition: only spouses, children (under 21 years old), and unmarried children of any age.

There is no yearly quota for green cards given to spouses, unmarried children, and parents of U.S. citizens, therefore, family members do not need to wait in line to get their green cards. But the processing time is long and significant backlogs exist. It can take one to ten years to process family based green card petitions.

For aspiring immigrants with highly valuable work skills or experience—especially those with science, technology, engineering, or math (STEM) backgrounds—a U.S. based employer can sponsor the immigrant for a green card through a presumed future job.

When the green card is issued, the immigrant is expected to take the position offered by the employer because the application is based on the immigrant’s employment with that company in that job.

Availability of employment based green cards is severely limited. U.S. immigration policy currently limits the total annual number of employment-based green cards to 140,000 individuals and the backlog is as high as 800,000. The annual quota is regularly exhausted on the same day they become available. Also, the fees required to be paid by employers for this type of green card sponsorship are quite steep, which means that only candidates with the highest levels of education or technical/work background can reasonably expect to obtain a green card via this route.

A subset of employment based green cards are reserved for immigrants who are sufficiently wealthy to invest significant amounts of money in the U.S. The investment visa program is formally known as the EB-5 Immigrant Investor Visa Program. The minimum investment amount varies depending on the geographical area where the investment is made, and can be as little as $900,000 USD or as much as $1,800,000 USD. The investment must be made to finance a U.S. based business that will directly or indirectly employ at least ten American workers. Applicants whose petitions are granted are given conditional permanent residence status in the U.S. for two years, and must provide evidence that their investment has created the minimum number of jobs required before the conditional residence visa is adjusted to a permanent residence visa (green card).

A predetermined number of refugees who apply for asylum from inside the U.S. or apply for refugee status from outside the U.S. are admitted to the country each year. The annual quotas change from year to year, but the numbers have generally diminished in recent years, falling from an annual ceiling of 70,000 in FY 2013 to a proposed ceiling of only 15,000 in FY 2021.

To be granted asylum or refugee status, there are two conditions that must be met. The first is that asylum applicant must establish that they fear being persecuted in their home country. The second is that applicant must prove that this persecution is based on race, religion, nationality, political opinion, or particular social group.

Successfully achieving asylum or refugee status is a difficult task. Asylum cases in the United States fail or are rejected at a rate as high as 65% as of 2018.

Each year, approximately 50,000 permanent residence visas (green cards) are awarded through the Diversity Visa (DV) Lottery, which is also referred to as the Green Card Lottery. These green cards are available to people who were born in countries with low rates of immigration to the United States. For the purposes of the program, a low rate of immigration is considered fewer than 50,000 immigrants to the U.S. the previous five years. Applicants qualify by country of birth. Anyone who is selected in the lottery can apply for U.S. permanent residence. Those selected (“winners”) can also request green cards for their spouse and any unmarried children under the age of 21.

Apart from having been born in a country with a low immigration rate to the U.S., applicants must satisfy only basic education or work requirements.

After all is considered, the Diversity Visa (DV) Lottery is the only feasible path toward obtaining a U.S. green card for most aspiring immigrants. Participation in the program does not require the applicant to have existing family living as permanent residents or citizens in the United States and does not require a job offer in the U.S. (nor an advanced educational degree or specialized work experience). The DV Lottery is the easiest, fastest, and most cost-effective way to get your green card.

USA Green Card is accepting registrations today for the next Green Card Lottery. Apply today for your chance to get your very own green card!